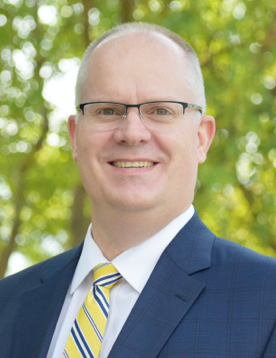 President Cameron K. Martin was named the second president of Rocky Mountain University of Health Professions (RMU) in December 2022. He started presidential duties on January 1, 2023. Before becoming president, Martin worked as vice president of operations and chief of staff for the Office of the President at RMU.

As vice president of operations, Martin oversaw and assisted with human resources, facilities, and procedures. As chief of staff, he helped RMU Co- Founder and Founding President Richard P. Nielsen in managing the demands of the Office and the interests of the University to internal and external constituents. Additionally, he coordinated Title IX matters for the Office of the President.

Before joining the RMU team, Martin was the vice president of the University Relations at Utah Valley University. He oversaw and assisted with university efforts in government affairs, community relations, public relations, marketing, campus events, economic development, and diplomatic hosting. President Martin worked for the Utah System of Higher Education as an associate commissioner for economic growth and planning. He managed the system’s presidential searches and annual evaluations of the college and university presidents.

He earned a bachelor’s degree in political science, a master’s degree in public administration, and a Ph.D. in educational leadership, all from Brigham Young University. His doctoral research focus was on the role and organizational value of interim university presidents. President Martin and his wife, First Lady Julie K. Martin, have three children.
They live in Provo, Utah.