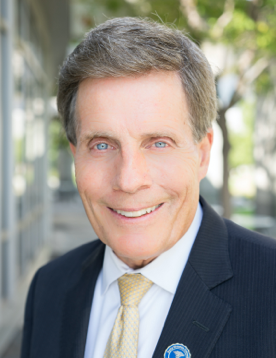 With over four decades of healthcare provider and higher education service and experience, Dr. Richard P. Nielsen has served as the founding president and CEO of Rocky Mountain University of Health Professions from inception in 1998 and founding president/CEO of the Noorda College of Osteopathic Medicine (Noorda-COM) from inception in 2017 to July 2021.  It was his vision and leadership which brought about the creation of both institutions.

After obtaining two separate Bachelor of Science degrees from Brigham Young University (pre-physical therapy) and the University of Utah (physical therapy) during which time he served in the US Army National Guard for six years, Dr. Nielsen served in the United States Navy Medical Service Corps for over 20 years. During his time in the US Navy, he held several esteemed positions, one of which included serving as the Chief Physical Therapist for the entire US Navy and Physical Therapy Consultant to the US Congress and Senate, the Surgeon General, the US Supreme Court, the Pentagon, and the US President and White House.  While in the US Navy Dr. Nielsen obtained a Master of Science degree in neuro-kinesiology (neurophysiology) from the University of Washington.  He also obtained a Doctor of Health Science (DHSc) degree from the University of St. Augustine with an emphasis in Clinical Electrophysiology.  Dr. Nielsen became Board Certified as an Electrophysiological Clinical Specialist (ECS) and has since re-certified three times.  He has published in peer-reviewed journals in the specialty area of Clinical Electrophysiology.

Dr. Nielsen has co-founded with his wife, Jodi and their eldest daughter, Kindee, two charitable foundations (Reach The Children 1998-2006 and World of Difference (www.worldofdifference.ngo)- 2006-present), both of which have focused on enhancing education opportunities by building schools for underserved children in Africa and focused on regenerative and sustainable agriculture and health and nutrition for the people in Africa.  For over 34 years, Dr. Nielsen has led teams to Africa.  Since 2013, World of Difference has partnered with Rocky Mountain University of Health Professions by taking graduate students to Kenya and Malawi to work in developing country hospitals and clinics.  In 2013, Dr. Nielsen and his wife, Jodi, received the American Red Cross Humanitarian of the Year Award for their service to the people in Africa.

Dr. Nielsen has received several recognitions in the medical community, including the 2015 Leader of the Year Award from the American Physical Therapy Association and in 2019, the Utah Hero of the Year Award for healthcare education.   The Nielsen’s live in Salem, Utah and have five children and seven grandchildren.