We Shall Overcome – A Black History Panel Recap 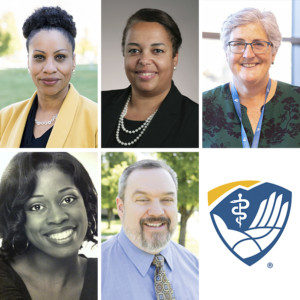 On February 24, 2021, the Student Diversity Committee (SDC) and the University Diversity, Equity, and Inclusion Committee (UDEIC) at Rocky Mountain University of Health Professions (RMUoHP) held a panel discussion titled Black History Month: We Shall Overcome. Five panelists discussed their experiences and shared their knowledge of healthcare, specifically the disparities and struggles that they have noticed people of color experience within various areas of healthcare.

Event panelists, Michelle L. Webb, EdD, OTD, OTR/L, CAPS; Wendy Chase, MA, CCC-SLP; Shanda Gore, EdD; Chayla Harris Gaines, PhD; and Ray Rodriguez, MPH, MCHES, discussed both the imbalances within the healthcare system and the ways in which members of this system can rise up to create a welcoming and inclusive environment for everyone.

For example, panelists discussed that one of the largest issues between healthcare providers and many minority communities, particularly the African American community, is a lack of trust. This lack of trust is prevalent on both sides of the medical divide and can lead to increased health risks for many individuals.

“Trust is one of the biggest pieces which creates the issue of not going to the doctors and catching some of the underlying issues affecting individuals,” said Gore. She recommended that healthcare professionals interact with these communities on a regular basis to address this issue.

She told healthcare professionals, “Do not take it personally when a patient seems defensive or aggressive,” said Gore. “Instead, attend to them the best you can and try to tell where they are coming from. It could merely be from a place of fear and not knowing what to do. Hesitate and then educate.” In order to build trust with patients, however, there needs to be trust on both sides. “Do not be afraid to go into certain communities,” said Gore. “If you keep showing up that builds trust too.” As relationships are built between healthcare providers and the general populace trust will naturally accumulate.

The panelists also discussed some of the health challenges faced by minority communities. “Over five million people in the United States have been diagnosed with Alzheimer’s disease and dementia,” said Webb, “African Americans are twice as likely to develop Alzheimer’s and Hispanics are one and a half times more likely to develop Alzheimer’s than their white counterparts.” Webb discussed the various potential causes for this particular disparity, some of which are clearly modifiable and some of which are not, but trust is a major factor.

People of color often wait to go to the doctor, said Webb. “We’re not going to the doctor when those symptoms arrive, we are waiting until we have progressed so far into the disease that we are looking at higher medical costs and conditions because we were hesitant to go. We as healthcare professionals have to find a way to connect. It’s a matter of life and death.”

Aside from increased risk for disease, there is a disparity in the infant mortality rate. “In the United States, black babies die at three times the rate of white newborns during their initial stays,” said Gore. “The National Academy of Science states that when black doctors care for black babies the mortality rates cut in half.” When examining the factors attributing to these results, Gore said that she believes these outcomes are caused by “social determinants of health, where the hospitals are placed, and trust.”

Gaines added, “The disparities I’ve seen in healthcare have been largely due to trust, representation, and language barriers…We speak these terms and vernacular that is simply not understood and I have found that it is imperative to use a lot of layman terms.” If healthcare professionals and patients fail to understand each other, it contributes to a lack of trust between the two groups. Chase added that there is a “dichotomy of service for young children who are black. They either get overdiagnosed or underdiagnosed because people don’t understand how to understand the language that they are using.”

The panelists also suggested steps that healthcare providers could take to better serve their communities. “I think failing up and learning from mistakes is important in healthcare,” said Rodriguez. “Look at what we can do in terms of personal training. What is your community social contact and contract? What does it tell you?”

The “failing up” process means looking at details that may seem, at first, to be inconsequential. For example,  “When BAND-AID made their bandaids more diverse, I rejoiced,” said Gaines. “As small as that is, it made a huge difference in the black community. You’ve got to find unique opportunities to tap into the ideas of children and break down these barriers. Be okay with stepping outside of the box but also celebrate those moments, like being able to see a different hue that wasn’t always there.”

Sometimes individuals are unsure of what they can do to improve the healthcare system. Webb recommends using the Office of Minority Health as a resource to learn more about the issues and potential solutions involving minority communities and impacting healthcare as a whole.

With the charge of Advancing Knowledge and Advancing Healthcare, RMUoHP understands the significance of these conversations for current and future healthcare providers in impacting healthcare change.